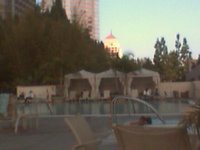 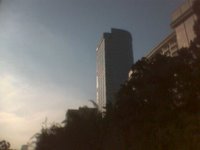 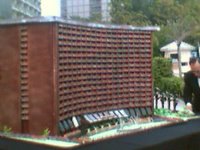 I just came back from the Hyatt Regency Century Plaza here in LA. It's on the west side near Beverly Hills. They were celebrating their 40th anniversary with a cocktail reception. It was pretty nice except they needed some food since it was at 6:30 pm. They had really good hors d'oeveres (did I spell that right?) like lobster ceviche and salmon pinwheels. I had some really good mojitos to drink as well. They made this replica of the hotel in chocolate and candy which was really amazing. It apparently took them weeks to make it. I met the General Manager and made a contact with the Director of PR. She said we should go to lunch. She wants some press. LOL! These pics suck by the way. I always get to these events and realize that all I have is my camera phone. At least I have that so I can document my exploits in some fashion. Someone donate me a nice camera then!