Nu-Soul T-shirts and other goodies

The Nu-Soul T-shirt is finally here. For those of you who have been asking about the shirts you have seen me in, the wait is over. Order your Nu-Soul t-shirt now to help promote the future of soul.

We didn't stop with just shirts. Browse our Nu-Soul shop for a variety of items such as hoodies, sweatshirts, bags, hats, mugs, mousepads, and more! 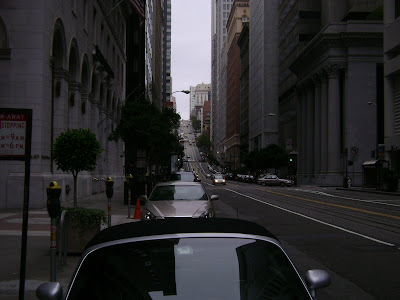 I absolutely love San Francisco and I find any excuse to go up there from LA. It is only an hour flight or a 5 hour drive but it's like being in another world. For one, the city has a more urban and centralized feel than LA, so it is easy to get around either by foot or by public transit. I like staying in the downtown because it is close to all the shopping, there are lots of cute restaurants, and all the trains and buses are nearby. 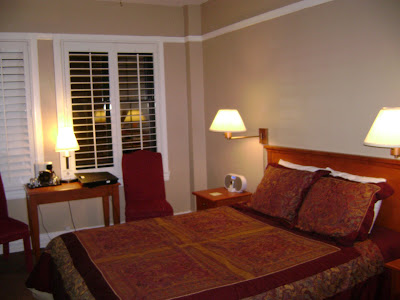 This time I stayed at the perfect little Hotel Mark Twain. It is a reasonably priced property on Taylor right across from the Hilton. They have regular rooms as well as deluxe rooms that have a few extras such as an Ipod dock and a flat screen. The location was so wonderful. I walked out of my hotel and I was instantly in the bustling streets of San Fran.

Check out the Hotel Mark Twain 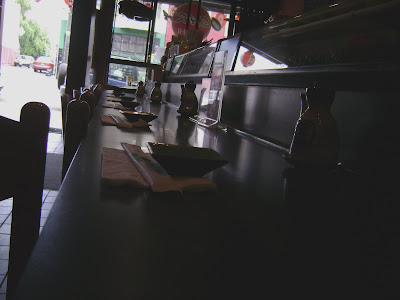 As always I did a lot of walking and eating while in town. The cutest place I went to was a little sushi joint called Osaka Sushi located in the Castro. It was very serene and the service was quick and friendly. They had an awesome lunch special that gave you two items from a list and miso soup, salad, soy beans, and rice. I got the salmon teriyaki and a spicy tuna roll. Good stuff. 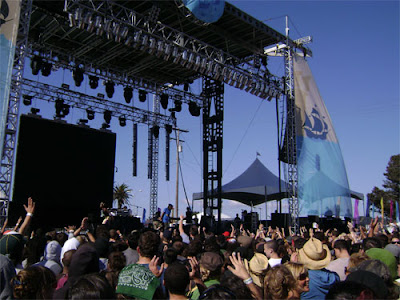 But the real reason I was up in the Bay area was to cover the Treasure Island Festival. It was a new Coachella-style indie music festival being held in the bay just over the bridge from the city. The lineup was great with major talent such as M.I.A., Ghostland Observatory, Thievery Corporation, Mocean Worker, Cut Chemist and DJ Shadow, and Zion I. Be on the lookout for my article in Prefix Magazine fairly soon. So until my next time up in the Bay, I will miss you. Next up for me Florida and maybe a jaunt to Detroit! 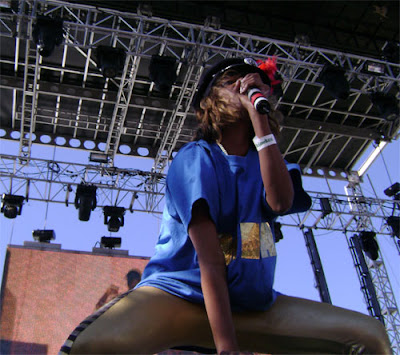 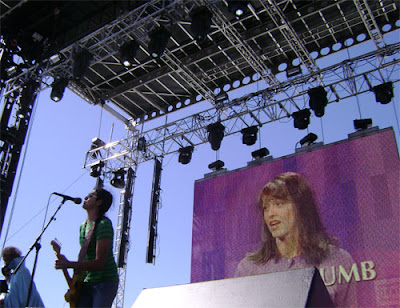 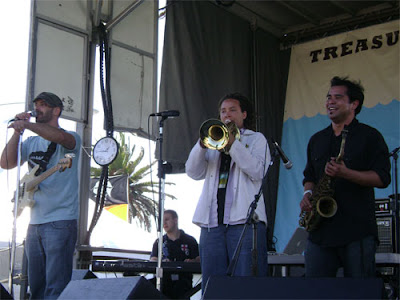 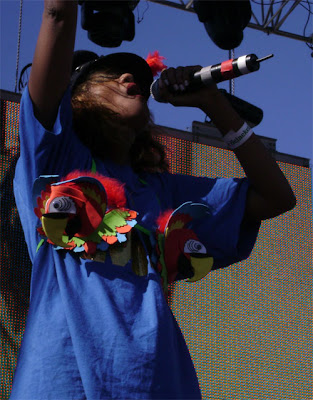 * Special thanks to the San Francisco CVB and Hotel Mark Twain for assisting me on this trip!

As a part of Nu-Soul's mission to bring you the finest in soul and electronica and everything in between, we have an exciting new addition to our Strictly Social event on September 27th.

We will have a special Meet-and-Greet with brand new Om Records recording artist Samantha James. Samantha's smooth voice and empowering lyrics landed her a #1 song on the Billboard dance charts with her single "Rise".

This month experience the beauty of Angie Stone's new album The Art of Love & War, in stores October 16. Be one of the first to hear this new instant classic from the reactivated legendary Stax Records. The new album marks a creative rebirth for Angie Stone, channeling the best of the soul tradition with a fresh and modern sound.

*Special Thanks to Stax Records, Giant Step, and Om Records 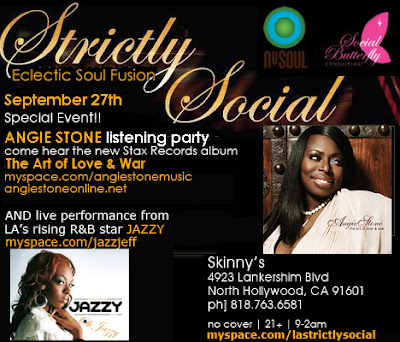 This month experience the beauty of Angie Stone's new album The Art of Love & War, in stores October 16. Be one of the first to hear this new instant classic from the reactivated legendary Stax Records. The new album marks a creative rebirth for Angie Stone, channeling the best of the soul tradition with a fresh and modern sound.

In case you didn't know M.I.A. has a new album out and it's the next level of world music. With production from Switch, Diplo, and Timbaland this is one not to be missed.

We've had a lot of soul contests as of late now here is something for you electronica fans. Underworld is about to drop their new album Oblivion With Bells on October 16th and to celebrate they are embarking on a tour hitting a few select cities around the US.

If you are in San Francisco, then this might be your lucky day. Nu-Soul Magazine is giving away two pairs of tickets to catch Underworld LIVE on Saturday September 8 at the Warfield. Paul Oakenfold is opening the show!

To enter simply email your full name and phone number to info@nu-soulmag.com with the subject Underworld SF no later than noon PST on Friday September 7.

We will select two winners at random and they will be contacted by phone.

Underworld's Oblivion with Bells is releasing on October 16th via Side One Recordings.

The album kicks off like Saturday night with Sven Väth, Simian Mobile Disco and Frankie Knuckles all fighting to get on the decks, then takes you over the flat fields of rural Essex, through Kings Cross with its olympic dreams and piss stained alleys, ending blissed out in a hidden cover in Ibiza. Epic techno nestles next to frail acoustics, beatific prose next to sharp urban observation, amazing sound texturing mixed with mobile phone recordings, rarely has the Underworld palette been so rich.

www.myspace.com/daz_one
DJ DAZ originally from the UK, came to Los Angeles in the early nineties...met up with DJ Marques Wyatt, DJ Orlando (then A&R @ Delicious Vinyl Records), and DJ P to form the first Acid Jazz club in Los Angeles, BRASS. DJ Daz went on to DJ parties and spin for Sade, Lenny Kravitz, The Pharcyde, and along with the BRASS crew, promoted and DJ'd the first Los Angeles shows of Jamiroquai, The Roots, Roy Ayers, Digable Planets, The Brand New Heavies, and many others.

Never to fall short of his creative
endeavors, in 1992, alongside DJ Tomas, Daz started UMOJA SOUNDSYSTEM. A crew of like-minded DJ's whose influence musically range from reggae, soul, jazz, rare groove, hip hop, electronica, D&B, and house, with each dj having their own niche.

DJ Daz then went on to be a resident DJ at Chocolate Bar, LA's longest running True School Hip Hop club and he has been featured in Fader Magazine, URB Magazine, LA Times, and the LA Weekly. In 2002 Daz won a LA Weekly Music Award for "BEST DJ" (Selector), and was invited to spin on Garth Trinidad's "Chocolate City" on KCRW.

DJ Daz is also an on-air personality and contributes mixes for TRUTHSEEKAS Radio (Friday Nights 1-3 am) on 90.7 KPFK, and currently promotes SPEAKERBOXX (Fridays @ Carbon) (www.carbonla.com). If you would like to hear podcasts of his Mix CD releases, they are available for free @ www.dazdillinja.podomatic.com

A-Ski is one of the most prominent and influential DJ's in the LA dj/party scene. His style often described as "refreshing and energetic" has earned him a loyal following and a reputation for being "the peoples DJ" following in the footsteps of legends such as GRANDMASTER FLASH, DJ ALADIN, JAZZY JEFF and LARRY LEVAN.


Born and raised in Los Angeles, this vinyl guru serves as a founding member of the rising sensation LA/NYC production team FOUR TRACK MINDS. He is also currently the host and producer of The Kajmere Sound Radio Show exclusively sponsored by SCION and is a Music Journalist for BEAUTIFUL DECAY, and NU SOUL MAG. He has opened up and collaborated with the likes of Seal, Marley Marl, Pete Rock, DJ Spinna, Rich Medina, Wah Wah Watson, Me'Shell Ndegeocello, The Rebirth, Talib Kweli, RES, Andy Vargas (lead singer of SANTANA), just to name a few.


With over 15 years under his belt, A-Ski has a magical way of creating an atmosphere while tapping into the pulse of emotion and depth in all of his sets. He doesn't simply view deejaying as an opportunity to play good music and assist party goes to enjoy a party, he views deejaying as a vehicle to change to world and one day fulfill his dream to lead people to realize that we are all "one" and can experience this journey of life together. You can catch A-Ski on Kajmere Sound Radio, streaming online at www.scion.com/channel11