On February 27 Nu-Soul Magazine presented another edition of Strictly Social. We are consistently bringing a new vibe to the Los Angeles scene with eclectic performances.

So who exactly is HEAVy? On their debut album JazzMoney$$, out on BBE, the duo take uptempo soul and feed it a bag of magic mushrooms, spinning it on its head, switching up the tempo and ramping up the intensity.

Read the interview by Norman Mayers

Om Records by far had the best party at the conference last year. It's all about this amazing venue. If you are in Miami, don't miss this!!!!

Reid Speed isn’t new to the dance world. Beginning her career as a clerk at New York’s legendary Breakbeat Science, Reid emerged in the early 2000s as one of the few female faces in the drum & bass scene, becoming an instant underground hero with her girly looks and New York attitude. She has released a few major mix CDs, appeared in Triple Five Soul ads, DJed for Jamie Kennedy’s show, and received ink in major publications like Urb. But with the changing music scene, Reid did the unthinkable. She moved from New York to Los Angeles and started making a name for herself as a breakbeat DJ. The change has worked and Reid continues to be one of the most booked female DJs in the US, switching styles from breaks to DnB, depending on the occasion. But it’s her commitment to the scene and culture that has truly kept her relevant in these fickle times. A down-to-earth personality and unquestionable skills and charisma on the decks are just icing on the cake.

Read the interview at Urban Breakbeat

Join us for the next movement of.....


Detroit's HipHop ambassador to the world....
Relocated to Los Angeles....
Ran Detroit's Hip Hop scene for over a decade.
Released the highly sought after JayDeeUnreleased in 1997...
Released PhatKat's Dedication to the Suckers 12" in 1999...
The House Shoes Collection Vol.1 : I Got Next followed in 2004...
and Loungin' Vol. 1 : Live at the Buddha Lounge in 2005...
Professor of all things Detroit.
Loved by many, Hated by few(cocksuckers)...

Make sure to peep the podcast at www.shoeshouse.podomatic.com

DJ Concise, a member of the Los Angeles's very own Beathackerz Kollective, has been djing in and around venues from Los Angeles, Las Vegas, San Diego, San Francisco, New York, and even overseas for 8 years. He is also part of an underground internet radio show called Excursions (www.twelvez.com) in which himself DJ Analog & DJ One Man Jazz broadcast live every Saturday from 11am-3pm to reach out open minded music to open minded people. A show blended with beautiful and melodic sounds, his love for music comes first and his aim is to please the soul through the medium of eclectic sounds. Playing everything from hip hop, soul, funk, latin, bossanova, brazillian, reggae, downtempo, trip hop, broken beat, disco, soulful house, cuban, afro-beat and jazz, the records are endless groove schemes that will take you on a worldwide trip of infinite soundscapes.


BZ, networker extraordinaire, promoter par excellence, DJ? Absolutely….yes, the man that you see at all the spots, that everyone seems to know, has swiftly perfected his signature groovy mélange of beats that is guaranteed to set the mood and get your head noddin. As a long time lover of music, he began splicing cassette tapes & wreckin the folks turntables as a youngster. It was his first exposure to Hip Hop however that changed his life….though it was nothing he had ever heard before, something about it made him feel completely at home. Since then, he has searched and researched everything Hip Hop, fully immersing himself into all the aspects that makes Hip Hop unique. This passion led him to try his hand in all the elements and thus it's natural that he's smoothly segued into expressing his passion for music via the turntable. Also moved by the music in the form of dance, its inspired BZ to expand beyond hip hop and dig into the dance driven sounds of funk, nujazz and future soul. Nevertheless, when you hear his sets, there's always an underlying thread of Hip Hop that connects it all. With a goal of continually exposing good music to the public, BZ has found balance between dropping new and refreshing beats while still while building on classic sounds. It's his desire that his sets continually spark the urge in people to keep searching for new and fresh sounds because even if the sounds are new to your ears, the music can still strike a familiar chord in you…as if you already know it….just like his like his first reaction to hip hop.


Food served until 1am!
valet & plenty of street parking


This is what you missed last month!!!

Add to My Profile | More Videos

RSVP to info@nu-soulmag.com for free entry b4 10:30pm. One of LA's hottest night for eclectic soul! 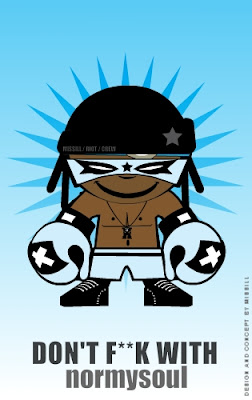 Big ups to the Future Sound of Breaks crew for hooking me up with a Powerpuff version of myself. It must be me since I have my shirt off and a shit-eating grin across my face!

Future Sound of Breaks, known to many as "FSOB", has taken the world by storm. With the branding's unique approach & feel for event production, top notch marketing and overall quality music at its festivities, it is understood why the name has grown to be the largest brand in the world of Breakbeat. Going on its 6th Anniversary this Winter Music Conference, this year is set to be the biggest for Future Sound of Breaks with the success of its 1st World Tour.


This year's festivities include such highlights:


*Featuring All-Star Talent from Around the Globe

*5 Rooms of State of the Art Sound + Lighting

*Main Room Presented by Against the Grain + Supercharged {UK}

*Exclusive Filming for the Future Sound of Breaks Documentary

HYDRAULIX aka ASH-ROCK + JIMI THE GENIUS

FIXX vs. CHRIS B

PARTNERS IN CRIME aka PHASE 2 + PRIEST

IT'S OFFICIALLY A MOVEMENT!

Artist: Rogiers
Title: Life & Music: All Of It
Genre: Soul/Electronica/Hip-Hop
Read the review

Nu-Soul Magazine and Soul Union once again bring you a night of eclectic soul fusion with Strictly Social.

On Wednesday February 27 prepare for the most eclectic lineup yet!

House legend JESSE SAUNDERS will be performing a special DJ set in support of his new book House Music: The Real Story

www.myspace.com/jessesaunders
Purchase the book at Amazon

Setting the vibe will be the amazing photography of Gregory Prescott
www.myspace.com/prescottphotography

Admission is free with RSVP to info@nu-soulmag.com b4 10:30pm and just $5 after so get there early!

We did it again. The January 2008 edition of Strictly Social was just plain incredible! This monthly event is quickly becoming one of the coolest nights in the LA soul scene. The evening started off with a listening party for HEAVy's amazing album JazzMoney$$. This next level album set the tone for the rest of the night and the early birds were able to cop a free copy of this excellent album

The venue was adorned with the photography of Kawai Matthews or Air Philosophy. She has shot the likes of J*Davey, Vikter Duplaix, Jazzy, and more!
Check out Air Philosophy

DJ Moonbaby took control of the decks at 10:30 dropping some hot beats on the swelling crowd. Then at 11pm Amber Ojeda and her band took to the stage for their soul/hip-hop/jazz blend. The heads were nodding in approval throughout her set!

Then Jimi James took the stage with her incredible showmanship and skills on the mic. She was carried onto the stage like a mannequin before unleashing her high energy performance that spanned hip-hop, soul, and progressive electro soul. This is what Nu-Soul and Strictly Social is all about! Eclectic soul fusion at its finest!!!

Nu-Soul would like to thank everyone who took part in this event to make it a success: The core team of Nu-Soul, Soul Union, and Elemental Consulting; Fusicology.com; Going.com, Jimi James and Van Johnson; Amber Ojeda and her management; The Crockett Gallery, HEAVy, and BBE; DJ Moonbaby; Kawai Matthews; London Underground for supporting our artists; Social Butterfly; and to everyone who came out to show support for this growing movement. We are committed to bringing you the most eclectic night of soul music!

Be sure to add Strictly Social on myspace