My first article for Bleu Magazine 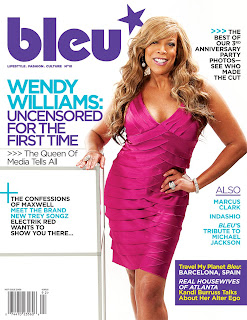 Hooray! My first published article in Bleu Magazine is here. I wrote a cool piece on Barcelona for the travel section and I also am featured as a contributor near the front of the book.

In the B Room - SOUL GOOD, soulful electronica hosted by Atlantic Connection

$5 before 10:30pm with an RSVP to events@nu-soulmag.com with the subject Strictly Social November
Must be received by 6pm night of show
Only $10 otherwise!!!
$5 presale tickets available at Groovetickets.com HERE

Shoot with URfoto in San Francisco 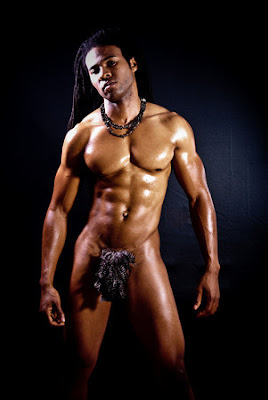 While in San Francisco recently, I shot with Anchi of URfoto Studio. He is a really sweet guy and we took some awesome photos. Here is the first one I got back.

Nu-Soul Magazine has got the perfect Halloween party for you! Join us on Saturday October 31, 2009 for a special Halloween night performance from Grammy diva Jody Watley!

She’s an innovative music maker, a style-forging pioneer: since the mid-90s, Grammy-winning multi-talented Jody Watley has led the way as an entrepreneur working in the independent music world as one of the few already-established female best-selling artists to produce, create and own her recordings. With an amazing 32 Top Ten Singles and 13 No. 1 Singles in the R&B, pop and dance music genres over the past three decades – including such classics as “Looking For A New Love” and “Don’t You Want Me” Jody Watley has made an indelible mark on music. 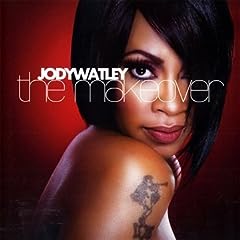 This event will take place in Downtown LA at the Church, a true centerpiece of underground LA. This magnificent 2-story indoor/outdoor venue has the feel of the massive loft parties of yesterday and is the perfect spot to party till 4am on Halloween!

Admission for this special event is $40
$20 with an rsvp to events@nu-soulmag.com
All rsvps must be received by 7pm the night of show
This is a Halloween party so COME IN COSTUME OR COME WITH $40

Meet McClain Sullivan, a Southern belle with the voice of an old soul. Fresh off her mesmerizing performance at Nu-Soul Magazine’s Strictly Social, the lovely Ms. Sullivan is ready to drop her eclectic EP My Machine. Bouncing from drum & bass to deep house to neo-soul to folk pop, but anchored by gritty jazz vocals, the EP is a solid introduction to the enchanting world of McClain Sullivan, a wonderful place you just may never want to leave. Check out the Nu-Soul interview with this rising star, download the exclusive track "Too Late", and enjoy the footage from her performance at Strictly Social!

A hip-hop release with empowerment and spirituality on its mind. Sure to be one of the year's best!

Get ready to let your wild child run free!

BROKE AS F**K is back at the Blu Monkey Bar & Lounge with a special Halloween edition on Wednesday October 28, 2009 for a journey into the sounds of bootyshaking breakbeat, bass, ghettotech, dubstep, and electro that is sure to keep your ass planted on the dancefloor!

There will be drink specials and CD giveaways

This event will take place at:

This charming Moroccan themed bar is under new management from those who support good music and underground culture!

My review of the new Nicolay album!

In case you didn't know Kress is one of Hollywood's most beautiful venues and it will be absolute insanity this Halloween! With three floors to explore including the gorgeous rooftop, plenty of sexy ladies and an open bar from 8pm-11pm, this is one Halloween event that is sure to be a blast! House, electro, and hip-hop will be the flavor all night so come out a party in style!

General Admission tickets are $60 but if you act fast you can get the Early Bird presale rate of $50. If you want access to the VIP rooftop be sure and get your VIP passes for the Early Bird Rate of $90.

Now in its sixth year, the San Francisco interpretation of Berlin's famous Love Parade, now titled San Francisco LovEvolution touched down on the city by the bay on Saturday October 3, 2009 without missing a beat. Despite the change in name, ravers from all corners of the globe had no problem finding this unique event and who could blame them. A massive parade in the heart of one of America's most beautiful cities and an all day festival for only $10 bucks was just the sort of uplifting occasion that people were looking for in our current broken economy. With attendance soaring past 100,000 revelers of all ages, genders, races, and orientations, LovEvolution has truly become a phenomena of epic proportions.

This being my third time attending, I decided it was time to switch up my perspective. Rather than simply watch from the sidelines it was time to become an active participant and my opportunity arose via an invitation to take part in the Om Records float in the parade. There was just one catch: the theme was SOLID GOLD! So like any good journalist, I manned up and got the job done, slipped on my gold tights, gold suspenders, and thick gold chain and entered the fray. In any other city walking around in gold pants for eight hours would be an excrutiating experience but in San Francisco, I became a part of the family. The float was packed to the edges with some 100 party people all scantily clad in gold so every ounce of fear immediately melted away. This was a chance to be apart of something much bigger than myself and once the float set out from 2nd and Market Street towards City Hall, the sheer magnitude of the experience became clear. Tens of thousands of people lined Market Street dancing on the sidewalk or following along with our float as Amp Live dropped a nasty set of electro and bass heavy bangers. Random people snapped my picture asking my to pose. I passed out fliers for the Om Records afterparty that night to everyone I could. God only knows how I kept those gold pants on!

Before entering the festival grounds I made a quick pitstop to my hotel room at the LovEvolution host hotel, the Renoir Hotel. The hotel, housed in a flat iron building two blocks from City Hall, is uniquely situated to fully experience the parade and I was fortunate enough to have a suite with a full view of the proceedings. I managed to snap this quick video from my room to let everyone know what they were missing. For both value and convenience make sure you book your room here next year!
www.renoirhotel.com


From there it was onto the actual festival. All the floats (nearly 30 in all) made their way around the Civic Center, parking around the square and setting up shop for a day full of beats of all sorts. House, drum&bass, electro, minimal, progressive, dubstep, it was all there and in heaping doses of quality to boot. I was impressed by the level of talent on display at LovEvolution from recognized names like Plaza de Funk and Groove Armada to locals dropping some heat. Friendly faces of all ages, outrageous costumes, amazing dancers, and beautiful people all melted together to create a swelling mass of Love that lasted until 9pm.

Ravers, music lovers, and everyone who is looking for a unique, authentic experience should take note. San Francisco's LovEvolution is quite simply an event that you don't want to miss. Surrounded by historical buildings in a city that has a history of progressive culture, you will definitely feel the LOVE. Thanks to everyone who made the experience what it was: San Francisco Convention & Visitors Bureau, the staff and management of the Renoir Hotel, the team at Om Records, the LovEvolution press team, and of course the Nu-Soul crew for representing with the photos. See you next year!

- as experienced by Norman Mayers
- photos by Erin Monahan

Norman Goldpants and the LovEvolution 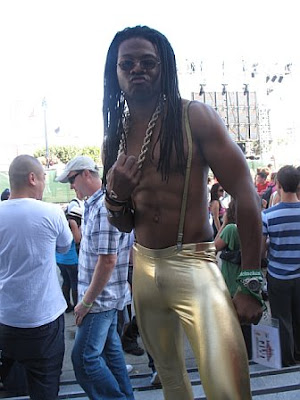 I just had to post these pictures from last week's LovEvolution in San Francisco aka Love Parade or Love Fest. I rode on a float where everyone had to wear gold and this was the look I put together. Fun stuff! This is just a warm up while I finish up my story. 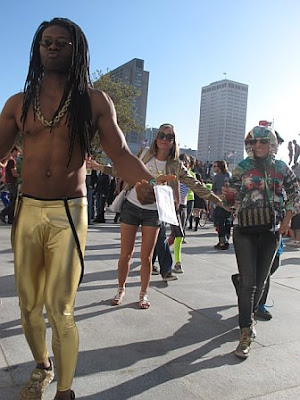 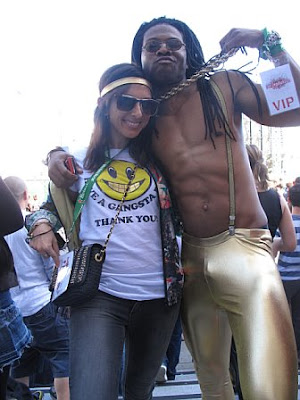 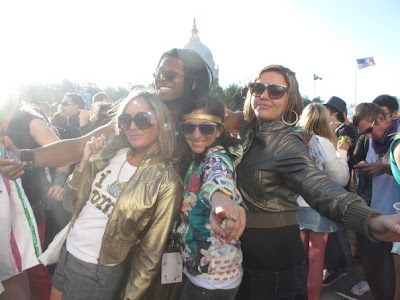 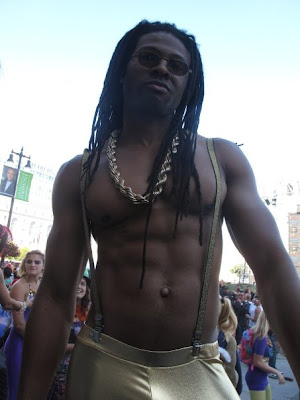 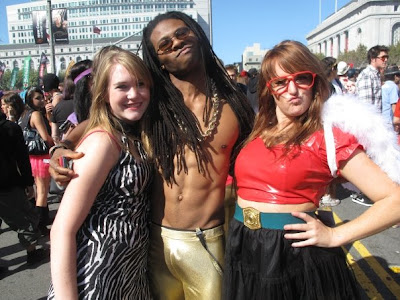 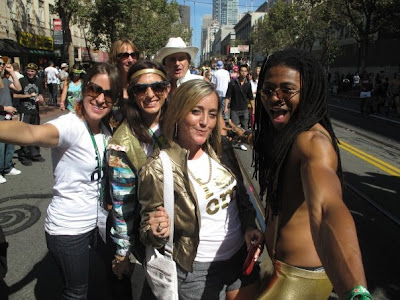 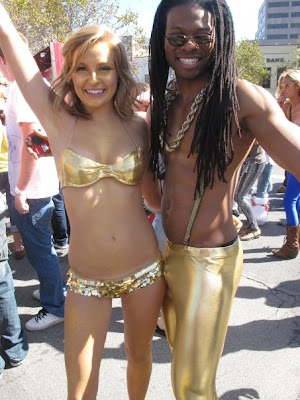 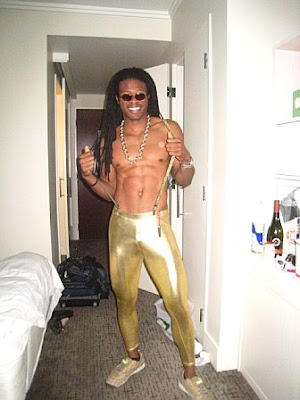